An interview with Seth Pheasant, Specification at Illumination Systems Arizona, and Sarah Gardiner from Zaneen.

The Arizona Fallen Peace Officer Memorial modernization project kept respect and appreciation at the forefront. While re-envisioning the space to maintain the beauty and update the spatial design, Zaneen was privileged to be specified for such a distinguished and honorable project. For years to come, visitors can recognize those who served in a space that illuminates gratitude.

Sarah Gardiner: What was the project timeline and is there an important/unique significance to the space?

Seth Pheasant: The project timeline took over two years from initial concept to finished product. This space signifies the fallen Peace Officers in the state of Arizona. It’s a place to reflect and honor those who sacrificed. 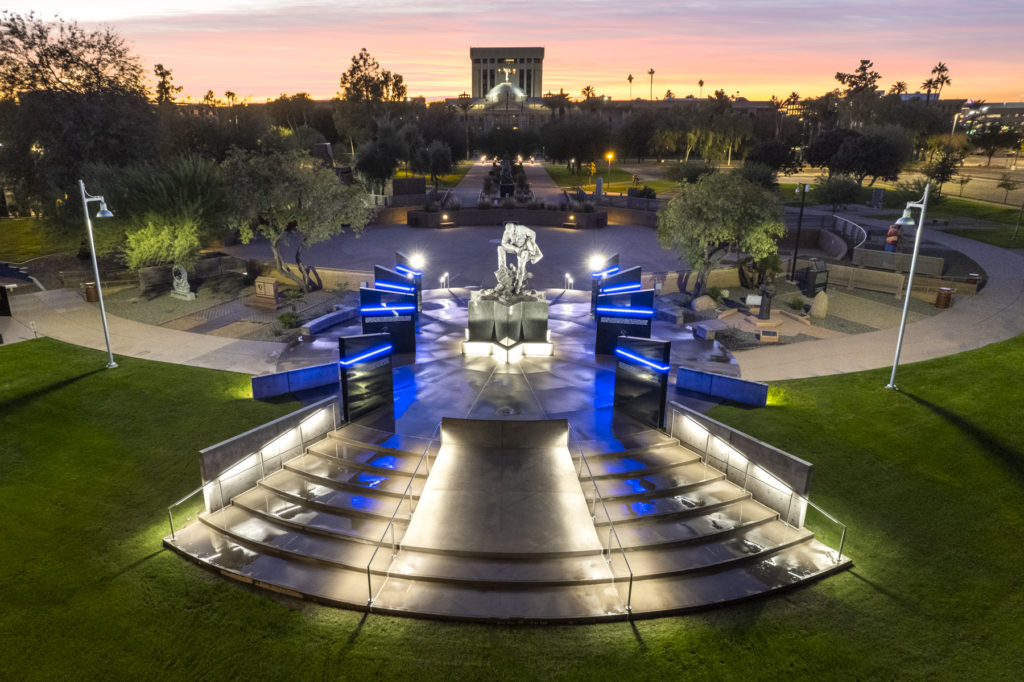 SG: What was the vision for this project?

SP: The vision in this modernization project was to create a space that was respectful of the original memorial’s bronze sculpture, which served as the focus of the memorial and stood on a star-shaped granite base with the etched names of the fallen officers. The goal was to provide new monoliths where new names could be added in the future and where the existing names could be transferred to.

The existing memorial design was also separated from the main plaza by a retaining wall. The vision for the new design opened the area to the plaza by removing a section of the retaining wall allowing it to host many different events ranging from ceremonies to the annual spring memorial recognizing fallen officers from the previous year.

The design also sought to pay homage to the State of Arizona. Using the original star base as inspiration, we decided to represent the Arizona flag on the hardscape of the memorial. Two alternating textures of concrete radiated from the center star in a pattern that represents the 13 rays of the flag. The design of the monoliths consisted of a rectangular form with the top sloping towards the sculpture and they were placed along the concrete rays. There was a horizontal blue light near the top of the monoliths that represented the “Thin Blue Line,” which is a sign of support for law enforcement.

SG: How did the project develop in terms of design from the initial concept?

SP: During the design process the design team met on a regular basis with the Arizona Peace Officers Memorial Board Committee, the Attorney General’s Office, and the general contractor to discuss the overall vision, goals, and design parameters for the renovation project. These meetings allowed all parties to collaborate and contribute to the final design. It was during these meetings that the design team learned that the original statue served as the backdrop for the yearly Fallen Officer Ceremony, which was held at the plaza. After the ceremony, it was customary for the families of the fallen officer to walk to the memorial to view the names etched on the granite. This further stressed the need for openness and accessibility from the plaza to the memorial.

SG: We are thrilled to be included in such an important and memorable project. Why did you focus on Zaneen as the lead lighting provider?

SP: I chose Zaneen due to their long line of success with creating durable products that can withstand the Arizona heat, as well as create a sleek look that is hidden. It is a high traffic area so we needed a fixture that could produce plenty of uplight while creating a quiet floor.

SG: What lighting challenges did you run into from the time of specification to installation?

SG: How did Zaneen contribute to solving these challenges?

SP: We worked with the Zaneen team to pay for expediting and work through the UL listings process. Everything came out on time and no trade was delayed.

Lighting solutions customized to your needs.

SG: What was your favorite part about this project?

SP: My favorite part was to be a part of the opening memorial that honored the Peace Officers and to see their families present was an honor itself. To see their emotion when walking around the memorial made every bit of challenges worth it.